On a dare, Alvin Lee assembles a band and plays a gig that is recorded and released as “In Flight”; he continues with Ten Years After but takes the new band ‘Alvin Lee & Company’ on tour at the end of the year.

The concert is recorded and will later be released as the Alvin Lee & Company “In Flight” double LP.

Two songs from this concert “Money Honey” and “Don’t Be Cruel” were broadcast on the U.K. TV show “Old Grey Whistle Test” a few weeks later, but none of the footage has since been released.

May 17, 1974 – The Spectrum/Philadelphia,Pennsylvania Also on the bill: BTO, Climax Blues Band

June 13, 1974 – Cow Palace/San Francisco,California With King Crimson and The Strawbs

November 21, 1974 – Tivoli Koncertsal/Copenhagen, Denmark
Got To Keep Moving, Let’s Get Back, Running Round, Freedom For The Stallion, Somebody’s Calling Me, All Life’s Trials, Time And Space, How Does It Feel, There’s A Feeling, Let The Sea Burn Down, Every Blues You’ve Ever Heard, Percy’s Blues ), Money Honey, Going Through The Door, I’m Writing You A Letter, Ride My Train 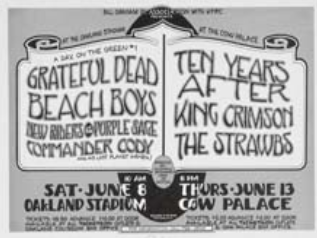