Alvin Lee tours with Alvin Lee & Company, but heads to the U.S. for one final tour with Ten Years After. It will be 1989 before he appears with TYA in the U.S. again.

J anuary 10, 1975 – Orpheum Theater/Boston, Massachusetts
Got To Keep Moving, Let’s Get Back, Somebody’s Calling, Somebody Waltz, Freedom For The Stallion,All Life’s Trials, Time In Space, There’s A Feeling, Every Blues You’ve Ever Heard, Percy’s Blues, Money Honey, Jam, Going Through The Door, I’m Writing You A Letter, Ride My Train (1st encore), Slow Down (2nd encore).

February 11, 1975 – Memorial Coliseum/Portland, Oregon
The other performers on the bill were the James Cotten Blues Band and Johnny Winter.

August 22, 1975 – RooseveltStadium/Jersey City, NJ
This show was billed as “The Battle Of The Bands” and included The Faces and Lynyrd Skynyrd.

August 26, 1975 – The Spectrum/Philadelphia, PA Also on the bill: Peter Frampton

“Pump Iron” Promo Films (1975)
Alvin made four 16mm promo films for the 1975 “Pump Iron” LP. These include promos for: Truckin’ Down The Other Way, One More Chance, Time In Space and You Told Me. These promos are included in the 1993 Viceroy Music Alvin Lee “Rockspective” home video. See them on our audio/video pages. 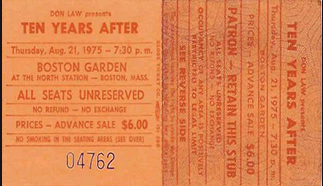