TYA begin the year with their first appearance at the prestigious Royal Albert Hall in London in what will be a year of resounding successes. They’re among the first rock bands ever invited to play the Newport Jazz Festival and they ‘re the first band to take the stage at the Woodstock Music & Arts Festival after the rain storm ended – just one of the festivals played that summer.

February 25, 1969 – Marquee Club/London, England with The Spirit of John Morgan

March 7th set list: “Since My Baby Walked Out On Me” (traditional blues), Adventures Of A Young Organ (jam), No Title, Good Morning Little School Girl, (the song has not yet evolved into the familiar arrangement with the classic Lee/Lyons guitar and bass interplay), Spoonful, Hobbit, I Can’t Keep From Crying Sometimes, Help Me , I’m Going Home. The other acts supporting Ten Years After were Spirit and Country Weather.

Jimi Hendrix comes to watch the April 10th show. The other acts on the bill were The Nice and Family.

June 9, 1969 – BBC Studios Playhouse Theatre/London, England TYA recorded “Good Morning Little Schoolgirl”, “Woke Up This Morning”, “I Can’t Keep From Crying Sometimes” & “Crossroads” for Top Gear broadcast on June 15, 1969, except “Crossroads” which was broadcast during the rebroadcast on July 27, 1969.

July 4, 1969 – Newport Jazz Festival, Rhode Island
Ten Years After perform “I May Be Wrong But I Won’t Be Wrong Always”, “Good Morning Little School Girl” and “Help Me”.

July 12, 1969 – Laurel Race Course/Laurel, Maryland
with Jeff Beck Group, Sly & The Family Stone, Mothers of Invention & The Guess Who. Savoy Brown was scheduled but apparently did not appear The TYA set included I May Be Wrong But I Won’t Be Wrong Always, Hobbit, Good Morning Little Schoolgirl, Help Me and I’m Going Home.

November 6 – 9, 1969 – Jazz Festival/West Berlin, TYA performed at one of the days during the Berlin Jazz Festival

November 17, 1969 – Jahrhunderthalle/Frankfurt, Germany with Chicken Shack
“I May Be Wrong, But I Won’t Be Wrong Always”, , Good Morning Little School Girl, I Can’t Keep From Crying Sometimes, I’m Going Home.

December 3, 1969 – Kulttuuritalo/Helsinki, Finland
Spoonful, I May Be Wrong, Hobbit, School Girl, No Title, Scat Thing, I Can’t Keep From Crying

December 6, 1969 – K. B. Hallen/Copenhagen, DenmarkA portion of this show was broadcast on Danish DR-TV on Toppop Beat ’69 in two parts on December 13, 1969, and May 16, 1970.
The songs included in the TV broadcasts were: I May Be Wrong But I Won’t Be Wrong Always, Good Morning Little School Girl, Scat Thing and I Can’t Keep From Crying Sometimes.

December 11, 1969 – Guildhall/Southampton, England with Blodwyn Pig and Stone The Crowes

Rehearsals Film (Frankfurt, Germany 1969)
This 16mm color film by Wim Wenders was recently broadcast on German TV. It is about 46 minutes long and is a single camera front view of TYA performing I Can’t Keep From Crying Sometimes (in which Alvin breaks a string) and two versions of I Woke Up This Morning (different lyrics and arrangement than what was later to appear on the Sssh LP). 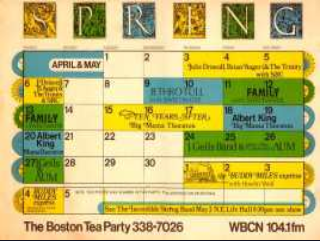